to help them process and cope with their traumatic experiences through artistic activities. By sharing their memories and emotions through the artistic expression, children are able to recover from their traumatic experiences, through arts and play. In this way, children fill the social-emotional gaps caused by the trauma itself and activate an autonomous process of healing and encouragement that helps them connect with their peers.

“The language of art is universal, it strengthens the character, self-confidence, curiosity, cheerfulness and directs us one to another ”

Save the Children started to promote the HEART method (Healing and Education through the Arts) in Bosnia-Herzegovina (BiH) in May 2014, during the devastating flood that hit the country, as a psychosocial support tool for children and families, victims of the disaster and suffering from PTSD, by launching a pilot project in Tuzla Canton (Phase I, 2014-2015), in collaboration with the local Ministry of Education, to integrate the HEART method in the canton education curricula. During this first pilot phase, 60 HEART Facilitators (Kindergarten and Primary School teachers) have been trained, reaching a total of 5’000 children. Thanks also to the support of the Pedagogical Institute of the Canton, the program is now implemented in every Primary School of the Canton (grades 1-9, children aged 6-15).

The excellent results obtained during Phase I, while confirming the HEART method as a winning approach to address the needs of thousands of children severely affected by chronic stress and victims of pre- and post-conflicts traumas, encouraged Save the Children to spread and replicate the HEART method inside the education curricula of the surrounding Cantons, Posavina and Una-Sana, in synergy with the relevant local authorities so as to ensure the long-term sustainability of the project over the years and its future replicability throughout BiH. Thus, between 2016-2019, also with Alta Mane support, Save the Children, in collaboration with the local Ministry of Education of Posavina and Una-Sana Cantons, successfully replicated the program, confirming the satisfactory conditions to integrate the HEART method in the cantonal education curricula. Between 2016-2019, the HEART method was, de facto, implemented in 61 Primary Schools, 1 Kindergarten, and 8 Drop-In Centers (for Street Children) in Posavina and Una-Sana cantons, reaching 6’293 boys and girls (aged 6-15), and training 269 teachers and pedagogues to replicate and implement the HEART method in their classes.

The three pilot phases of the project ended in 2019 with the achievement of two important programmatic-projectual and institutional goals. On the programmatic-projectual level, 3 primary schools of Una-Sana Canton (Prekounje Primary School, Harmani I and Harmani II Primary School of Bihać) have been selected, in collaboration with the Ministry of Education of Una-Sana Canton, as HEART Friendly Schools, equipped with all necessary materials to become territorial Hubs for the dissemination of the HEART methodology and, on their turn, to provide peer-to-peer monitoring activities to all teachers willing to integrate HEART in the everyday school activities. On the institutional level, the signature of the Memorandum of Understanding with the Ministry of Education of Una-Sana Canton, while proving the value and importance of the HEART program and improving its monitoring and territorial implementation, has guaranteed the interest of the competent local authorities to develop a strategy for a long-term sustainability aimed at a possible institutionalization of the HEART method across the country and its future integration into the national education curricula. 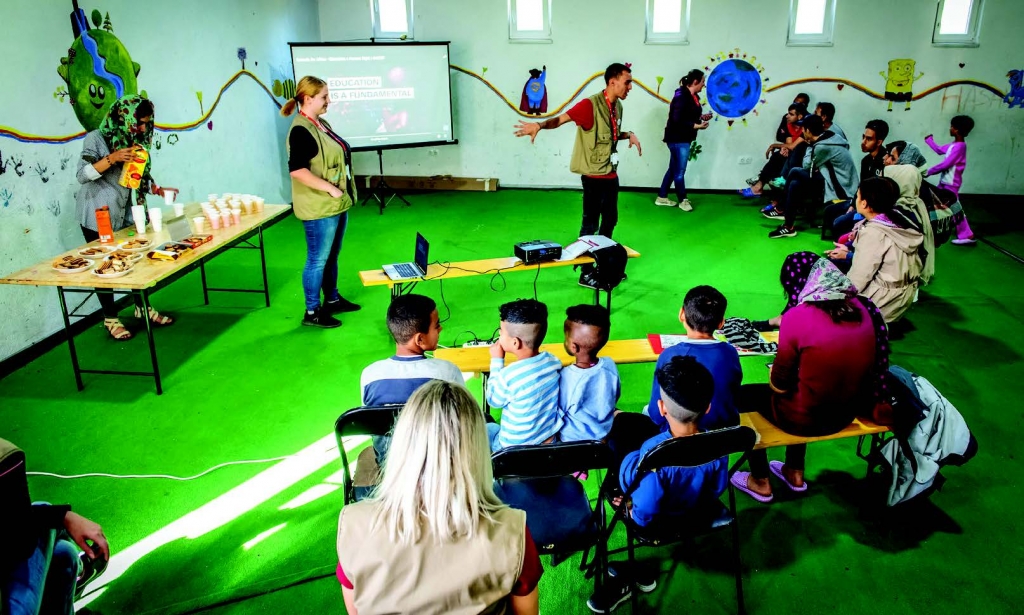 “We have a HEART workshop once a week, but I use many elements in everyday classes, so that children in a way come in touch with this methodology practically every day, they respond excellently and actively participate, and most importantly, they have interest for it and learn by playing. They are convenient for me as a workshop facilitator to get to know the children even better, some of them who are shy or not active at classes simply ‘flourish’ at these workshops, they are encouraged to get actively engaged or to present in front of their peers, and I often discover some of their new talents”

Since 2015, more than one million migrants and refugees, including around 300’000 children, have travelled through the Balkans Route in an attempt to reach Europe. The agreement with Turkey (March 2016) instead of slowing down the flow of people, adults and minors, in transit, has only increased their vulnerability: there is an increasing number of migrants victims of violence, abuse, and robbery by unscrupulous smugglers. Children, especially unaccompanied minors, are most at risk of violence and abuse, including sexual violence.

Although until 2017, the flow of migrants and refugees – mainly from Iraq, Iran, Syria, Afghanistan, Bangladesh and Pakistan – remained constant, since January 2018, with the drastic closure of the Mediterranean border, there has been an increase of 66% in the number of people arriving to Bosnia-Herzegovina, amounting to around 70’315 people, of whom approximately 17’000 in 2020. In 2020, only in Una-Sana Canton, the Bosnian worst affected Canton by the migration flows mainly coming from Algeria, Morocco and Somalia, despite a sharp decline in new arrivals compared to the previous years due to the spread of COVID-19, there were 8’000-11’000 people officially identified and registered. Actually, the real number of new arrivals in 2020 is estimated to be almost twice, “invisible” people who, escaping from all sorts of official referral systems, without any right and living in poor sanitary conditions, are at high risk of exploitation, violence and abuse, and Human-trafficking.

Since 2018, Save the Children North West Balkans, in an attempt to respond, in a timely and targeted manner, to this dramatic migration emergency (since 2020, sanitary and emotional as well), has inaugurated a new type of “emergency response” intervention to ensure minors on the move, including accompanied and separated children, full access to high quality services in terms of protection, educational and social integration, as well as psychosocial support, inside and outside the 3 Transit and Reception Centers of Bira, Borici and Sedra, set up in Una-Sana Canton. The HEART method has been chosen for its flexibility and intrinsic ability to respond therapeutically, through the artistic expression, to the needs of children suffering from different psychosocial traumas, including migration-related traumas, and PTSD.

Since the beginning of the migration emergency, Save the Children North West Balkans has developed a “Preparatory HEART Program”, an educational skills and competencies (linguistic, scholastic and relational) assessment program (up to maximum 3 months) based on the HEART methodology for minors located in the camps and intended to their educational and social integration in regular classes with their Bosnian peers. Successfully implemented in 5 Model Schools in Una-Sana Canton, identified with the collaboration of the local Ministry of Education, the program, with Alta Mane support, reached, between September 1st, 2019-September 30th, 2020, a total of 494 minors, migrants and refugees (aged 6-15), located in the 3 Transit and Reception Centers of Bira, Borici and Sedra.

In collaboration with UNICEF and the local NGOs Zene Sa Une (until the end of February 2020) and Association LAN (from March 2020), Save the Children North West Balkans organizes and implements inside the 3 Transit and Reception Centers of Bira, Borici and Sedra different artistic and educational activities for the younger children and unaccompanied minors, run as follows:

With Alta Mane support, between September 1st  2019 and September 30th 2020, Save the Children set up 3 CFSs in Bira, Borici and Sedra Transit and Reception Centers (TRCs) in Bihać, fully equipping them with didactic materials to offer several educational and artistic activities intended to minors located in the centers. Tailor-made for different age groups and adapted to their specific needs, the activities provided 7/7 in Sedra and Borici TRCs, and 3 days a week in the Bira TRC, have reached a total of 931 minors, migrants and refugees (aged 0-17), including 119 UASC, and 172 parents.

Successfully implemented since 2014, HEART contributed to:

implement qualitative standards in terms of reception, educational and social integration, psychosocial support and protection for migrant and refugee children in Bosnia- Herzegovina

offer to accompanied and unaccompanied minors, a psychosocial support through arts to help them start a post-traumatic resilience process, strengthen their coping mechanisms, and promote their social, emotional, cognitive and motor development

allow minors on the move to restore their childhood, a sense of normalcy, routine, structure, and recover a sense of future

build bridges of dialogue with the local communities, reducing the feelings of xenophobia towards the different populations on the move, through the development of inclusive, formal and non-formal, educational activities

improve the quality of teaching and cantonal education curricula (Tuzla, Posavina and Una-Sana)

0
minors on the move (aged 0-17), including 119 UASC, participated to several educational and artistic activities developed in 3 Child-and-Youth Friendly Spaces in Bihać (Una-Sana Canton)
0
boys and girls (aged 6-15), including 419 minors on the move, benefited from the HEART program implemented in 61 Primary Schools (Tuzla, Posavina and Una-Sana Cantons) and 5 Model Schools in Una-Sana Canton
0
minors on the move (aged 6-15) participated to the Preparatory HEART Program
0
facilitators (including 8 cultural mediators)
0
teachers have been trained to the HEART method
0
training sessions (Basic and Follow-up Trainings)
0
Model Schools (HEART Friendly Schools) selected in Una-Sana Canton
0
Child-and-Youth Friendly Spaces in the Bira, Borici and Sedra TRCs

“The first thing I do in the morning, after having breakfast, is running to the Child Friendly Space, where my teachers are waiting for me, with a smile. We have classes, learning languages, mathematics, arts, and after that we do something else for fun or we spend time outside playing sports (…) What I like the most, is that my teachers always have a smile on their face. If I’m sad, they help me feel happier. I realized that, if I go to school and learn, I will also always have a smile on my face like them”.